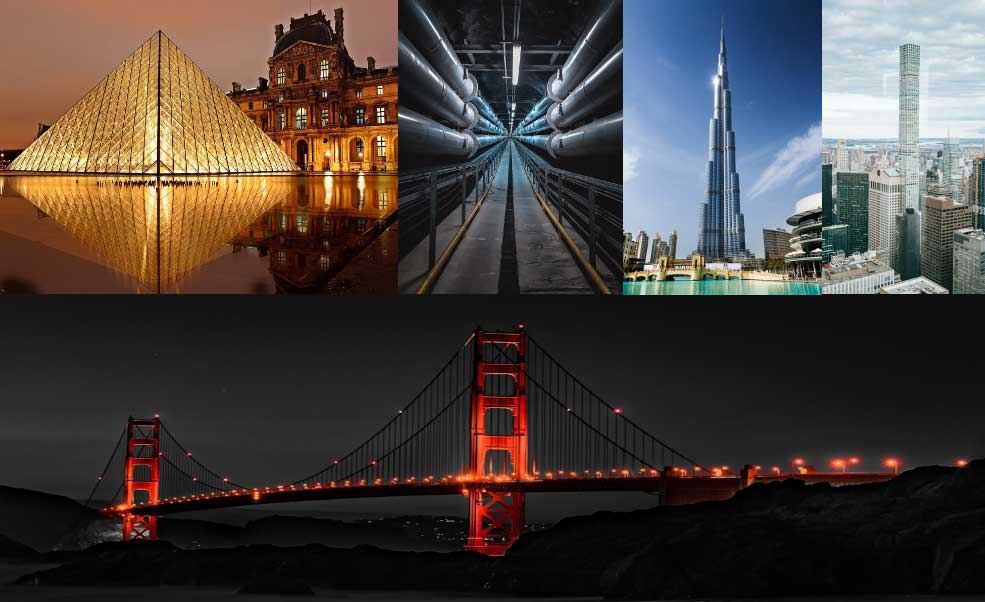 Buildings and structures don’t just have to serve the purpose for which they are created. There are thousands of facilities worldwide, built for different things that all have one thing in common – structurally and architecturally, they are beautiful. From design concepts to the materials used, many places are now thinking just about how they will look and feel from the outside as they are about how the building will function and support others. In this months blog, RWA takes a closer look at five structural designs that leave you breathless.

Known as being the tallest building in the world and the tallest freestanding structure, the Dubai-based Burj Khalifa was opened after six years of building on the 4th January 2010. Burj Khalifa was designed to be a commercial, residential and hospitality skyscraper hybrid. Totalling 162 floors and 2717 feet high, this building was designed by Skidmore, Owings & Merrill, with William F. Baker leading as the structural engineer for the project.

Based on an abstract rendering of the Hymenocallis flower, the structure has been carefully designed to avoid much of the wind force due to its height. The concrete core and perimeter columns hold the frame steady, and as you get further up the building, the shape changes slightly to allow for powerful winds at the top of the tower.

Stainless steel and aluminium panels make up the outside of the tower, and the 28,000 cut glass panels make it a stunning piece of design and engineering. Observation decks on the 142nd floor boast the most incredible views across the family of skyscrapers denting the Dubai horizon.

Back across the ocean to England, where nestled about 50m below the seabed, you will find the home of the channel tunnel. Connecting Folkestone, Kent to Coquelles is the longest undersea tunnel in the world. Since its official opening in 1994, approximately 80 million vehicles have travelled along the tunnel that 13000 engineers, technicians and workers helped to construct. Under the sea alone is 38km of tunnel made from concrete rings that are said to be some of the most robust concrete in the world – thank goodness considering what is above! Set to last for 120 years, French engineer Albert Mathieu put forward the first proposal for the tunnel and took five years to construct.

Boring machines were initially used to dig the tunnel, and the British boring machine was never removed – its permanent home is still under the channel! Three tunnels were dug, two that house the trains and one that acts as a service tunnel to support the inside. Both the English and French worked to meet in the middle to build the tunnel, although the English made it slightly further across the halfway line. Once the two sides met, the railway lines and service tunnel could be constructed safely and effectively, only opening one year later than its original finish date.

Whilst this engineering design is different in its ‘beauty’ aspects; no one can deny that its incredibly clever design and construction was nothing short of genius.

Without a doubt, the most photographed bridge in the world and we understand why. The Golden Gate Bridge is a suspension bridge to link both vehicles and pedestrians from California to San Fransisco. Completed in 1937 with the support of chief engineer Joseph B Strauss the bridge took four years to build and spans the length of 1280m with a total height of 746 feet (at its highest point).

All the deaths involved with the Golden Gate Bridge were as a result of falling during construction. Unfortunately, the bridge was the final resting place of some workers, with 11 dying during construction. Many men, unfortunately, fell to their death, even after Strauss installed a safety net – the net failed during a scaffolding collapse. 10 of the 11 died during this catastrophic event.

Designed with ships and beauty in mind, the colour (an orange) was used to blend into the natural landscape whilst also ensuring it was visible to ships moving in heavy fog. The floodlights across the bridge make sure it is lit clearly at night, and this element also adds to its beauty – with the colours dancing off the water below and creating a warm, luminous feel.

The Louvre Museum, one of the most beautiful glass buildings the world offers, has a very different approach to its history and changes through the centuries. Originally built as a Royal residence in 1546 for Francis I, it housed many royals until Louis XIV moved out in 1682 when he moved his court to Versailles. The building was then used as a public museum, and in 1793 the revolutionary government opened its doors to the public.

Over the years, there were many developments, but perhaps the most notable one was the steel and glass pyramid structure many of us see as the face of the Louvre, constructed and opened in 1989. Alongside this new development, the museum itself underwent a major remodelling to make it more accessible and accommodating to various visitors.

The pyramid has three sides to it, each holding a total of 171 glass panes, and the Louvre has confirmed a pane total of 673, much to the controversy that the structure holds 666 panes to associate itself with Satan and the book of revelations. Although there has been much speculation, the Louvre has confirmed this is not the case! The pyramid has the same proportions as the Pyramid of Giza and is 116 feet wide and 70 feet high. Ninety-five tons of steel and 105 tons of aluminium were used to create and support the iconic building.

The tallest residential building globally (currently) is an iconic skyscraper across the New York skyline. Work of structural genius, 432 Park Avenue construction was started in 2011 and finished in 2015. With 85 floors and 1396ft from top to bottom, the average unit price in this tower will set you back around $10 million.

Built to be a luxury residence and home to some of New Yorks most elite, the tower is placed in arguably one of the best locations in central Manhattan and its interior is designed on a Japanese way of living, and architect and photographer Hiroshi Sugimoto carefully considered every part of the layout.

Various materials were used to create the interior, including Yakusugi cedar and shikkui plaster, whilst the exterior has 30 inch thick walls and a 30-foot core of reinforced concrete. The grid columns support the weight and height of the tower and offer a truly open plan living arrangement that is sought after by many homeowners today. Not only is the building design incredibly modern, but it also benefits from TMD (tuned mass dampers) that are built to reduce the amplitude of vibrations caused by environmental forces.

RWA Consulting – Bridging the gap between Civil and Structural Engineering

There are many different types of buildings. Some are designed for residential purposes, while others are made for businesses. Of course, there are also ones made for particular purposes. As we can see from the small list above, various structures worldwide have captured the attention of the public, media and specialists alike, whether this is due to their beauty or controversy. RWA Consulting has consulted and supported a wide variety of commercial and domestic projects for many years and has specialisms in various areas. So whether you are looking to build the next Manhattan skyscraper or you are redesigning a high-end barn conversion, RWA Consulting is the Civil and Structural Engineers you need.